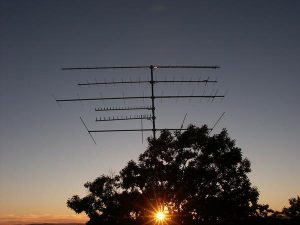 Growing Number of Operators Completing WAS on 222 MHz

After this story was posted, ARRL announced that it has validated the 222-MHz WAS application of John Swiniarski, K1OR, for WAS # 13. His last contact was with NH6Y in Hawaii on January 9.]

Until very recently, it had been some 35 years since the most recent Worked All States (WAS) was awarded on 1.25 meters. Former ARRL President Joel Harrison, W5ZN, in Arkansas, and Marshall Williams, K5QE, in Texas stand at the vanguard of a new generation of VHF enthusiasts aiming at earning the Worked All States (WAS) Award on 222 MHz (1.25 meters). Harrison was issued WAS #11 on 1.25 meters on December 27, 2021, while Williams was issued WAS #12 on January 11, 2022.

“Since the 1980s, a combination of the old guard and a new group have been pursuing this quest,” ARRL Radiosport Manager Bart Jahnke, W9JJ, said. Harrison worked Tom Worthington, NH6Y, in Hawaii, for his 50th state, while Williams followed close behind, working James Colson, K7KQA, operating EME portable from Oregon, for his 50th state.

Jahnke said the honor of being the very first 1.25-meter WAS recipient went to Terry Van Benschoten, W0VB, in 1983, earning what was then “220 MHz WAS.” Nine others joined the ranks between then and 1987.

“In recent years, several stations have been working hard toward joining the ranks of WAS holders on this ITU Region 2-only band,” Jahnke said. Other stations that have recently worked 50 states and waiting on the last confirmations include K1WHS, WA4NJP, and K1OR. N9HF and N0AKC are nipping at their heels. No activity on 1.25 meters was available in some of the last few needed states, and portable operations by KA6U, KB7Q, K7KQA, and N7GP made contacts possible.

“Congratulations to Joel and Marshall, and to all those VHF+ state chasers — and to the many activators of rare 222 MHz states — on their achievements in this continuing quest for 222 MHz Worked All States,” Jahnke said.

In 1988, when the FCC reallocated the lower portion (220 – 222 MHz) of the 1.25-meter band to the federal government and Land Mobile Service, amateur activity on the band stalled, while adjustments were made to equipment and band plans. During the past several years, so-called “weak-signal” activity, especially EME, has increased on the band with a renewed interest from existing and new band users.

Amateurs interested in staying abreast of 222 MHz activity can follow the fun on the 222 MHz Activity Reflector.

Harrison, Charlie Betz, N0AKC, and Al Ward, W5LUA, have written an article, “The Quest for 222 MHz WAS,” which contains tables, maps, and details on the propagation, locations, and equipment that made their operations possible. Ward was among the initial 10 WAS recipients for 1.25 meters. Plans call for the paper to be presented and published by the Central States VHF Society Conference in Eau Claire, Wisconsin, July 29 – 30 and at other conferences. Harrison said, the paper also has “lots of history in it about the 1.25-meter band, the original 10, and the group now in the hunt along with ongoing ‘roving’ efforts of KB7Q and KA6U.”