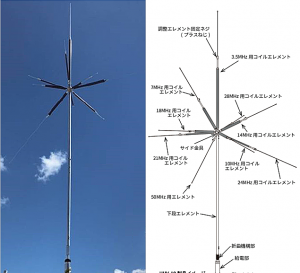 “We are pleased to announce the release of the HF multi-band mini GP antenna “UHV-10” (price including tax: 25,000 yen) from mid-December. Since the launch of the multi-band HF / VHF / UHF antenna UHV-9 two years ago, our design team, which has been watching the veranda HF vertical antenna market, will release the next model with confidence.

Multi-band that covers 3.5 / 7/10/14/18/21/24/28 (29) / 50MHz band equipped with HF machine, easy to install, and enhanced rigidity. All clear Done on the premise that it is reasonable. The appearance is like “Ashura Kannon statue”, and it seems that many big hands are spreading to the sky.

Inheriting the conventional slim antenna structure, thorough verification and repeated field tests have resulted in a satisfactory product. It is made in Japan, which is adjusted, inspected and shipped on the roof of our Saitama factory.

-Because it is lightweight and the antenna joint is M-shaped, it can be easily installed on a fence such as a veranda by using the mounting base you are using.

・ By making the outer diameter of the aluminum pipe 13 mm for the antenna body, the wind speed resistance is improved to 35 m / s.

-With an omnidirectional bending mechanism, the element coil can be removed with the antenna installed.

* Prepare a commercially available φ16 mm crimp terminal with an IV wire (5 to 10) of about 5 m as a radial tire, and attach it to the M-type connector joint.

* For the 50MHz band, a rod-type radial element CGW-Telescopic22 is available as an option.

* In the 50MHz band, SWR tends to be difficult to improve without a dedicated radial tire other than the HF band, so it is recommended to install CGW-Telescopic 22.