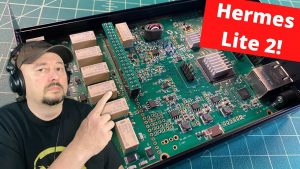 In this video, we take a look at the very cool Hermes Lite 2.0 SDR Transceiver HF Ham Radio.

The Hermes-Lite is a low-cost direct down/up conversion software defined amateur radio HF transceiver based on a broadband modem chip and the Hermes SDR project. It is entirely open source and open hardware, including the tools used for design and fabrication files. Over 500 Hermes-Lite 2.0 units have been successfully built.

Current development is focused on the next major version, which combines the FPGA, gigabit ethernet and AD9866 on a single board. Several versions of the Hermes-Lite 2 have been released.