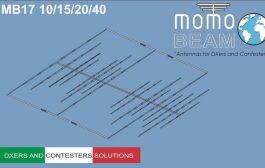 Dave, K4DRA, wants to try a double dipole set up in order to get an omnidirectional dipole, but he has yet to understand the circular polarization that his set up will create. Dave here to explain…

In the 1936 March issue of QST, Yardley Beers, W3AWH, described an antenna designed by his friend, Mr. H. J. Siegel, W3EDP. The design was based on th… Read more