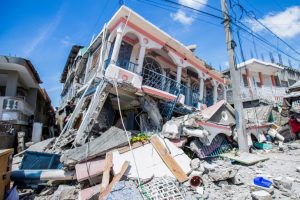 In the immediate aftermath of the magnitude 7.2 earthquake on August 14, Radio Club of Haiti President Jean-Robert Gaillard, HH2JR, reported significant structural damage in the region. At this time, it is not known if amateur radio volunteers have been part of the recovery.

Haiti also found itself this week in the direct path of Tropical Depression Grace, which could aggravate the recovery effort by dumping “flooding rains” over portions of Haiti and westward, according to the National Hurricane Center (NHC). In addition to flash flooding, the rain could cause mudslides on Hispaniola to continue.

The Hurricane Watch Net (HWN) has remained on Alert Level 2, monitoring mode, and is not currently active. Tropical Depression Fred was bringing rainfall across the Florida Panhandle.

Bill Hoops, K3WJH, an ARRL member in Pennsylvania who is with Southern Baptist Disaster Relief, reported that the US Coast Guard is flying injured people to hospitals that are open. Some radio amateurs volunteer with Southern Baptist Disaster Relief, which has been working through red tape to gain permission to assist in Haiti. Hoops said he continues patiently monitoring HF in Pennsylvania but had not been hearing anything from Haiti.

The US has sent a search-and rescue team to Haiti to help locate victims.

The earthquake came in the wake of the assassination of Haiti’s president, Jovenel Moïse. The island nation of 11-million, which shares Hispaniola with the Dominican Republic, has yet to fully recover from a disastrous earthquake in 2010 that devastated much of Port au Prince.

The New York Times reported at least 1,300 people killed in western Haiti. Survivors were seeking shelter in tents, while and rescue teams scoured the rubble for survivors and additional victims. Medical care and even basic supplies have been reported scarce in the quake zone, and some injured survivors have been airlifted to Port au Prince.

Seismologists say the quake occurred 6 or 7 miles below ground and was felt as far away as Jamaica, some 200 miles distant