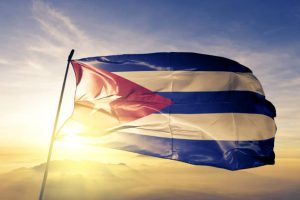 Reports suggest that jamming stations have been deployed on the lower portion of 40 meters. The jamming appears to be coming from Cuba. The signals, spaced at regular intervals, exhibit a squishy, popping noise. The apparent jamming showed up after anti-government protesters took to the streets in Cuba, followed by a government crackdown. So far, there’s no proven connection between the jamming and the protests, as evidence has been circumstantial. DX spots suggest that Cuban hams are on the air on SSB but do appear rare on 40 meters. A lot of Cuban spots point to FT8 activity. The jamming issue has drawn the attention of the FCC, which is looking into the matter, according to one tech publication.

“Too many people around the world are fighting uphill battles to be able to use technology to expand economic opportunity, express themselves, and organize without fear of reprisal,” an FCC spokesperson told Motherboard. “The FCC is committed to supporting the free flow of information and ensuring that the internet remains open for everyone. We are assessing these reports in conjunction with our field agents and communicating with the Department of State as this issue develops.”

Outside of ham radio, the ability to connect with some social media sites and even with the internet inside Cuba has been reportedly tricky. Connecting to the Federación de Radioaficionados de Cuba (FRC) website (Cuba’s IARU member-society) from outside of Cuba has been unreliable. This week, users attempting to do so — at least those in the US — got a shrugging cartoon character and the legend, “Acceso Denagado” — access denied. The FRC Facebook page is accessible, but links to the FRC website are blocked. FRC had warned of “possible outages” a week ago, attributing the problem to maintenance being done in the data center where FRC is housed.

Well-known amateur radio contester and DXer Fred Laun, K3ZO, pointed out in a July 17 post to the Potomac Valley Radio Club reflector that typical ham radio contacts with Cuba “are not normally about politics, though I suppose in the wake of recent events they may have become so.” Josh Nass, KI6NAZ, of the YouTube channel, Ham Radio Crash Course (HRCC), is calling the interference “The Cuban Rum Runner,” an oblique reference to the “Russian Woodpecker” of yesteryear. And Matthew Kaskavitch, K0LWC, recorded an “emergency broadcast message”on his YouTube channel, to advise viewers of the purported jamming.