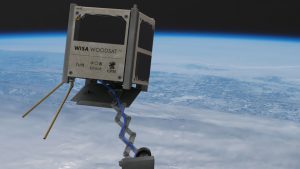 The WISA Woodsat project, being sponsored by plywood supplier WISA in an unconventional PR initiative, is poised to place a wooden satellite into orbit by the end of the year. The idea is to test the suitability of treated wood as a low-cost and widely available material for space applications. The IARU posting for Woodsat indicates that several amateur radio experiments will be on board as well as photo downlinking, including selfies.

The wooden satellite is based on a basic, versatile CubeSat format, Kitsat, which is designed with educational use in mind. It retails for just $1,500. Based in Finland, the Woodsat project began with students across the country contributing parts to a CubeSat launched by balloon. The satellite will be a 10-centimeter cube weighing 1 kilogram, covered on all sides by coated birch plywood from WISA plywood. Nine small solar cells will power the satellite, which will orbit at an altitude of 500 – 550 kilometers.

As the sponsor quipped, “WISA Woodsat will go where no wood has gone before. With a mission to gather data on the behavior and durability of plywood over an extended period in the harsh temperatures, vacuum and radiation of space in order to assess the use of wood materials in space structures.”

Once in orbit, Woodsat will be able to extend a selfie stick to capture photographs of the wooden box as it hurtles through space at 40,000 kilometers per hour (24,800 miles per hour. This will allow the mission leaders to monitor the impact of the environment on the plywood.

The satellite would downlink its telemetry and images from two cameras using amateur radio frequencies.

An April 23 Engineering and Technology article has more information. — Thanks to AMSAT News Service via JoAnne Maenpaa, K9JKM; E&T, and the IARU