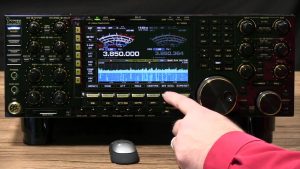 Icom has released a firmware update for the IC-7850/IC-7851 HF Amateur Radio transceivers. Also released is a related update to the RS-BA1 version 2 software (version 2.40).

Changes from the previous version include:
• Spectrum scope has been improved.
• Scroll mode that seamlessly changes the displayed scope range, depending on the operating frequency, has been added.
• A popup screen that displays when SPAN or EDGE is selected has been added.
• The number of FIX EDGE memories has been expanded to four.
• The Reference level is independently memorised for each band.
• The Reference level of the Centre mode scope screen while transmitting is fixed at a set level independent of the user’s selection.
• The Scope function of the RS-BA1 has been improved.

Other improvements include:
• The transceiver’s settings have been retained after updating the firmware (not when reverting to an older version).
• While operating in Data mode, the Receive Tone Control is deactivated.
• The default setting of the CI-V USB Port is changed to “Unlink from [REMOTE].”

Please note to follow the instructions carefully when performing these updates.