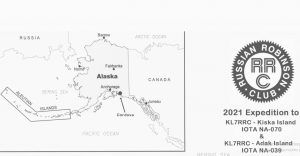 The uninhabited Kiska Island (52.06° N, 177.57° E) lies in the North Pacific’s treacherous Bering Sea, which RRC calls one of the most intense patches of ocean on Earth and where strong winds, freezing temperatures, and icy water are the norm. The island also features the prominent conical Kiska volcano. Kiska Island is a National Historic Landmark and part of the Aleutian Islands World War II National Monument and the Alaska Maritime National Wildlife Refuge (AMNWR). Permission to visit is required from both Alaska’s Maritime National Wildlife Refuge and the US Fish and Wildlife Service.

The KL7RRC team plans to have a minimum of two stations on the air on 40 – 6 meters, SSB, CW, and FT8. Operators will place special emphasis on the difficult trans-polar path to Europe.

The 56-foot aluminum sailing vessel Seal will make the 1,000-mile journey along the Aleutians to Kiska with a stop at Dutch Harbor to pick up Tim, NL8F, and the gear sent in advance to his location. The team will continue sailing west to Adak Island, where some team members will activate Adak Island on June 30 – July 3. The SV Seal will pick up the entire crew there, which will have flown in by July 3. Then, they hope to arrive at Kiska and be on the air as KL7RCC on July 7 – 12, before the return sail to Adak and flights home. Additional KL7RRC activity may take place from Adak July 14 – 16.

Donations are welcome. QSLs for KL7RRC (Kiska Island NA-070) and KL7RRC (Adak Island NA-039) are via N7RO. All donors will receive direct QSLs.

Updates will be posted on the Russian Robinson Club website. — Thanks to Hal Turley, W8HC, via The Daily DX