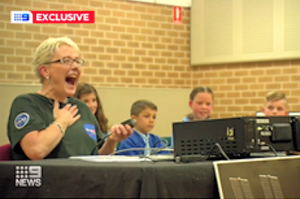 An April 20 Amateur Radio on the International Space Station (ARISS) contact with youngsters in the small town of Winmalee, New South Wales, Australia, folded excitement and enthusiasm into their studies. It was a live demonstration for ham radio trainees in Belgium too.

It took a couple of years to arrange the ham radio hook-up with teacher Alison Broderick’s K – 6 pupils at Winmalee Public School, but the effort put into the enterprise paid off.

Astronaut Victor Glover, KI5BKC, at NA1SS fielded questions on a range of space travel-related topics. The “telebridge” contact involved a direct 2-meter ham radio connection between Glover on the ISS and ARISS team member Jan Poppeliers, ON7UX, in Aartselaar, Belgium, who used the call sign ON4ISS for the event. Two-way long lines audio between Belgium and Australia completed the circuit for the approximately 11-minute contact.

Winmalee Public School’s curriculum includes a weekly STEM Lab, taught by a specialist primary science educator. Space-based studies also included lessons about the solar system, space missions, and the future of space exploration. Lessons in the run-up to the ARISS contact focused on the space station, how to track its position in orbit using applied mathematics, and the ISS crew members and their roles. The ham radio contact gave eight youngsters a possibly life-changing opportunity to learn about living and traveling in space by speaking with someone who’s already there.

Kindergartener Alberto Campos-Wagner enjoyed getting to ask Glover how the crew avoids hitting space junk. First-grader Indiana Bartush admitted to being nervous, but despite her butterflies, it went well. “I liked the way Victor talked to me,” she said.

“I’m still on a massive cloud of happiness, sixth-grader Asher Renwick said. “Victor was so nice, and his answers were excellent. I realized that most people come home to their family each day and take that for granted, but astronauts can’t do that. The whole thing was better than I ever thought it could be.”

Glover’s number one piece of advice: “Be resilient. Don’t stop in the face of challenges. Number two, be a life-long learner — learning inside and outside of the classroom, and number three is to be a good teammate. And you’ll always achieve success, no matter what your dreams are.”

Stefan Dombrowski, ON6TI, and Luc Vlecken, ON4ALV, took advantage of the opportunity to listen in to the direct 2-meter (145.800 MHz) signal from the ISS as a demonstration for their Belgian Army trainees learning about amateur radio.

“We both used the Australian Winmalee Public School ARISS QSO / ISS pass between Victor Glover, KI5BKC and the students to demonstrate Amateur Radio,” Dombrowski said. “This was a success as we heard all 18 questions and answers and the brief sign-off at both our sites with just a simple hand-held station. It was an excellent demonstration of ham radio capabilities and was also a good educational demonstration of antenna polarization and signal weakening with distance.”