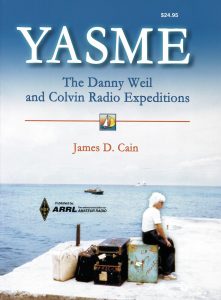 The Yasme Foundation has released two chronicles of amateur radio DX history that make for compelling reading — a downloadable edition ofYasme: The Danny Weil and Colvin Radio Expeditions, by Jim Cain, K1TN, and the extended article Danny Weil — a Dreamer of Distant Lands Who Took the Amateur Radio Trip of a Lifetime, by Martti Laine, OH2BH.

Cain’s 324-page history, initially published by ARRL in 2003 and now out of print, is available for the first time in a downloadable format at no cost. It includes some as-originally-intended revisions to the text as well as a new introduction.

“Even after years of writing a DX newsletter and then publishing dozens of feature articles in QST, I guess I hadn’t got it out of my system yet,” Cain said, recounting the book offer that was too good to pass up. “I had a lot of words and even entire sentences left in me.”

Cain’s book documents the lives and DX adventures of Danny Weil, VP2VB — of Yasme fame — and of Iris and Lloyd Colvin, W6QL and W6KG. It also offers a look into the DXCC program from the 1950s through 2000.

Between 1955 and 1963, Weil sailed to various exotic locations in his yawl Yasme (four different boats in all) to operate, escaping dangerous and life-threatening disasters more than once along the way. Another ham radio legend, Dick Spenceley, KV4AA, created the Yasme Foundation to provide funding for Weil’s excursions. He also prompted Weil’s fund-raising tour in 1956 to more than 100 ham radio clubs and gatherings. At one point, Bill Halligan, W9AC, of Hallicrafters fame, offered Weil $2000 worth of gear with the stipulation that he not use any other manufacturer’s equipment. Weil’s wife, Naomi, accompanied him on some of his maritime journeys to rare DX venues. In 1964, the Colvins took up the Yasme banner, visiting 223 countries and operating from more than half of them before their final expedition in 1993.

Yasme Foundation President Ward Silver, N0AX, said Cain’s book, “along with recounting some fascinating history, explains a lot about how the structures of modern DXing emerged, introducing many of us to the colorful characters who populated the DX scene at the time.”

Laine’s article provides even more details about the life of Danny Weil and his DXpeditions, drawing from Weil’s personal recollections as well as Cain’s book. The article’s web page includes links to a collection of Weil’s QSL cards and an audio interview of Weil at age 80 by Wolf Harranth, OE1WHC, of DokuFunk.

The Yasme Foundation, first established to support the DX adventures of Weil and then the Colvins, today supports various projects relating to amateur radio, with an emphasis on its development in emerging countries and encouraging youth participation.