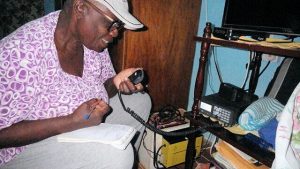 Donald de Riggs, J88CD, on the Caribbean island of St. Vincent, says that on April 13, the 42nd anniversary of the 1979 eruption of the La Soufriere volcano, island residents were awakened to another column of volcanic ash creating a thick blanket, obscuring part of the eastern sky as the volcano continues to erupt violently.

“Almost all residents in the Red Zone have been evacuated, save for a few diehards who will not move, for reasons unknown,” he said. Since the effusive eruption began last December, local hams have been in a state of readiness via 2-meter networks and regional networks via HF. A 24-hour regional HF network and vigil has been active since the violent eruptions began 4 days ago, to provide communication support should telephone service be disrupted by the volcanic hazard. This includes a twice-daily link-up on HF with the Caribbean Disaster Emergency Management Agency (CDEMA).

There is also a 2-meter gateway via EchoLink on the J88AZ node. The other active VHF repeater is the main resource for domestic communications. The Grenada repeater, which is linked to St. Lucia and Barbados, is also accessible by hams in Tobago, Trinidad, and St. Vincent and the Grenadines.

The La Soufrière volcano on St. Vincent began a series of explosive eruptions on April 9, sending clouds of hot ash some 20,000 feet into the air, blanketing much of the island in ash and causing water and power outages. The volcano is “a constant threat,” according to CDEMA. — Thanks to The Daily DX