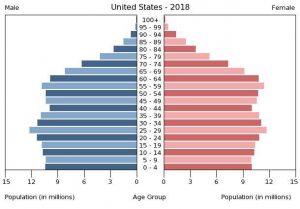 Frank Howell, K4FMH, followed up his two-part National Contest Journal (NCJ) series, “The Demographics of Contesting,” with a post to his Social Circuits blog, called “Lemmings over a Demographic Cliff?” (His original articles appeared in the July/August and September/October 2020 issues of NCJ.) Howell points to data showing that radio contesters are older than the average ARRL member. Taking into account information from the Bureau of Labor and Statistics on Leisure Time Use, Howell opines that this should be expected.

“Leisure pursuits are highest during youth and young adulthood but dramatically taper off about ages 25 – 34 until age 55 and over,” Howell said. “This hollowing out of leisure and sport time is a predictable outcome of competing and more important activities.” According to Howell, the main competitor to radio amateurs engaging in on-the-air or workshop activities is television (now more broadly referred to as “screen time”). No surprise there.

A Brookings Institution study on the topic using the 2005 – 2015 Time Use Survey documents how “free time became screen time.” About 2007, screen time (not just TV) surpassed other active leisure activities in average time spent. By 2015, the gap favoring screen time was more than 1 hour, reflecting an average of some 11 hours per week of activity. Howell argues that formats of major radio contests may serve the leisure interests of established contesters — those on the far end of the demographic spectrum — but may not offer the best experience for contesting newcomers.

“Traditional radiosport is facing a demographic cliff of aging ham contesters,” Howell asserts. “Those highly invested in the status quo won’t be around to experience the diminishing [number of] participants, [but] they now have the political clout to direct strategic actions.”

The ability for single operators to compete at a high level in a major contest requires time, equipment, and skill that are probably beyond many in the “caterpillar” stage, ARRL Contest Update Editor Brian Moran, N9ADG, recently observed. He suggests that most school-aged operators don’t have the time to stay in the chair all weekend.

“Those fortunate to be able to join seasoned teams of multioperators at well-equipped stations have a different contesting experience than those plugging away solo,” Moran said. “With the opportunity for mentorship, camaraderie of a group effort, and a chance to be part of something bigger, they’ll be more likely to emerge from their expected dormancy period as a contest butterfly.”

Howell argues that demography does not have to be destiny. “It does require taking the blinders off tradition and evaluating it for what it is today and what it means for the future,” he concluded. — Thanks to Frank Howell, K4FMH, and The ARRL Contest Update