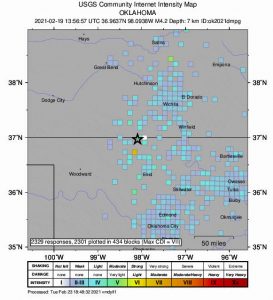 An article describing how radio amateurs can help fill the information “donut hole” by providing post-earthquake “did you feel it” (DYFI) reports via Winlink HF radio email appeared on February 22 in the American Geophysical Union (AGU) magazine Eos. As the article points out, “Ham radio networks gear up to provide real-time, on-the-ground information about earthquake shaking and damage when other communication pathways are knocked out of commission.” Authors of the article were David J. Wald of the US Geological Survey (USGS), Vincent Quitoriano, and Oliver Dully, K6OLI.

As the article explains, DYFI uses a questionnaire to gather individuals’ experiences and observations, and USGS uses the information to evaluate the shaking intensity at that person’s location. DYFI has been in operation since 1999 in the US and 15 years around the world, during which the USGS has gathered more than 5 million individual DYFI intensity reports.

The article notes that a potential problem is that “public access to it may be compromised as a result of strong earthquake shaking,” with affected individuals experiencing power and communication outages or may be distracted by more immediate priorities.

“USGS and other global seismic network operators have witnessed report ‘donut holes’ in areas of strong shaking due to loss of internet communication,” the article said, “most recently during the magnitude 5.7 earthquake that hit near Salt Lake City in March 2020.” The article suggested that “alternative pathways” of communication are needed to “gather important ground-truth shaking data with minimal delay.” And this is where amateur radio groups come into play.

“We now expect to sample the donut hole with the help of amateur radio groups worldwide,” the article’s authors said. “These groups, which already provide emergency communications capabilities to government agencies, hospitals, and other critical users during emergencies and disasters, can mobilize a significant number of licensed radio operators after a strong earthquake, especially near large population centers, ensuring a baseline level of macroseismic intensity reporting, even in heavily affected areas.”

As the article explains, USGS has partnered with Winlink, a radio email platform with more than 28,000 users worldwide, and with ARRL Amateur Radio Emergency Service (ARES®) members. “In June 2020, Winlink experts adapted the USGS DYFI questionnaire to their software platform, and this version is now available to all licensed amateur radio operators.”

This means that during a major earthquake, Winlink users can send their responses via radio to far-away receiving stations if they’ve lost internet service. “These unaffected, out-of-area stations, or gateways, can then forward data via the internet to USGS for immediate analysis,” the article said.