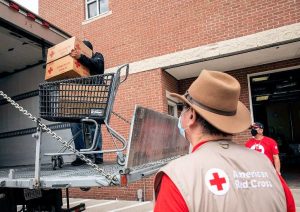 ARRL Amateur Radio Emergency Service (ARES®) and American Red Cross volunteers joined forces in Texas under the ARRL/Red Cross memorandum of understanding in responding to the situation resulting from unseasonably frigid weather. Kevin McCoy, KF5FUZ, said the Red Cross formally requested an ARES activation in Texas to address the effects of the natural disaster, which included a lack of drinking water, power outages, fuel shortages, and frozen plumbing, among others. Red Cross in Central Texas supported more than 60 warming shelters at the request of governmental agencies.

“We made a special effort to use Winlink email over radio to get reports of infrastructure problems and unmet needs [and to] communicate information about warming centers,” McCoy said. “I would say that Winlink operators attending local nets and passing on information was the most valuable contribution in this unusual and unprecedented disaster. We had literally hundreds of Winlink operators across Texas who were trained and ready. Some of these teams, especially in counties that are still suffering, may be active with other served agencies.”

Several teams deployed to support emergency operations centers (EOCs) in Bexar, Brazos, Kerr, Travis, and Williamson counties, he said. “Some of these ARES organizations were also serving the needs of the National Weather Service and local government — as was the case in Williamson County,” McCoy added.

“Our effort in the start of the activity was to focus on folks with medical needs who required power, and to get those folks to safety,” McCoy said. “Reports from operators were passed to Disaster Program Managers and Disaster Action Teams and to Red Cross Disaster Mental Health personnel for evaluation. Government partners and citizens provided transportation and Red Cross provided hotel rooms in areas with reliable power to keep these citizens safe while following COVID protocols.”

An early report from Texas Hill Country concerned infrastructure failures in public service communication towers, which affected 911 calls in Mason County. This was followed by loss of cell towers in nearby counties. “Those early reports really gave us an idea of what we were in for, and that was the beginning of power failure escalation in Texas,” McCoy said.

Power outages have now dropped from some 4 million customers to some 100,000, indicating the start of recovery operations, with damage assessment already under way.

On February 20, Red Cross made a formal stand-down request to Texas ARES sections from the Central and South Texas Red Cross Region. “Transportation, communication, and internet had restored sufficiently to allow for that change of status,” McCoy said. “We made a call out to the 83 counties that we serve, and did not receive any requests. We did let all Winlink operators know that we would still monitor the tactical addresses until the disaster recovery was over. We have had some infrastructure and condition reports after we sent the stand-down.”

McCoy said some ARRL Section Managers and local Emergency Coordinators were strongly encouraging their teams to engage in their communities as their radio responsibilities decrease. He cited SEC Greg Evans, K5GTX, as “an excellent example” of an SEC who has been keeping his team both well informed and well armed with “how ARES/ARRL operators can help best through the phases of this unprecedented event.”

Key issues remaining include the prolonged power outage and the freezing weather that left Texas with damaged water infrastructure. “Things are improving rapidly,” McCoy said on February 22, “but coupled with the loss of transportation and people being without water for days, we have a huge need for points of distribution for water inventories and additional water flowing into the state.”

“We have a lot of work to do,” said McCoy, who called it, “a very frustrating environment for organizations that want to help.”

“We all are getting a lesson in the cascading failures resulting from cold and power outages. Government, business, and non-governmental organizations are all cooperating to help.”