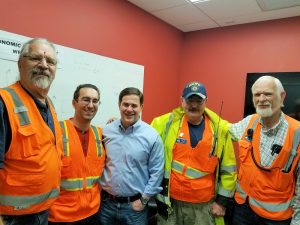 Weather gone wild might be an apt description of the conditions in many parts of the US, with sub-freezing temperatures in areas not prepared for that sort of thing. Aberrant weather seems to be happening across many US regions. Snow has fallen in Texas and Oklahoma, accompanied by record-setting temperature readings..

The severe weather has caused power and telecommunications outages, and ARRL Amateur Radio Emergency Service (ARES) volunteers in southern Texas have been called up by served agencies to help fill the resulting communication gap. The National Weather Service (NWS) says a weather system will help to create a new wave of low pressure in the Gulf of Mexico that will become the next winter storm to track across the Lower Mississippi Valley and into the Ohio and Tennessee Valleys.

“A massive winter storm is moving across the Ohio Valley into the Northeast bringing snow, sleet, and freezing rain,” the NWS said. “Expect significant travel disruptions and power outages. Another winter storm will move into the south-central US bringing another round of snow and ice. Arctic air with frigid temperatures and dangerous wind chills will persist over the central third of the US this week.”

A net to address power outages, vehicle accidents, health and welfare, power outages, and weather updates has been running 24 hours for the past 2 days. Two repeaters in his area are down, due to power and generator outages, he said. Electrical power in his area has been up and down, but his cell service has mostly been working.

Gilbert reported 4 – 8 inches of snow on the ground and “lots of ice.” Temperatures have dipped into record-setting single digits. “The whole state is in a rolling blackout,” he said. “The roads are very treacherous, and emergency services have not been able to respond to all calls as a result.

Gilbert reported at around 2200 UTC on Tuesday that Williamson County ARES (Wilco ARES) is using the 146.640, N5TT Williamson County Amateur Radio Club repeater, the 146.700, N5MNW, Jeff Schmidt repeater, and the 147.080, NA6M, Mark Stennet repeater. “They are running 24 hours for the next few days and have been since Sunday, with a net controlled formal net.” He said they were able to help one ham who had no heat, a car out of gas, and 18° in the house to find shelter for him and his dog.

The ARES net is tracking the rolling blackouts as the local provider grid becomes overwhelmed by increased demand. “Some water shortages were reported, as pumping stations failed from lack of power,” he said.

Gilbert said the plan is to run the net until Wednesday with 24-hour operation and then evaluate the continuing need. ARES participants are reporting all pertinent information to Williamson County served agencies and emergency management.

Miller said the rest of New Mexico is digging out of three storms’ worth of snow and frigid temperatures. “Several stations are reporting rural roads are impassable, especially in the mountains,” he said.

Chaves County SKYWARN Coordinator Jim Tucker, KB0QNW, in southeast New Mexico, reported, “We continue to experience rolling blackouts. I continue to monitor local and regional repeaters and systems, as well as the 7290 Traffic Net, should any need arise. I [passed] a message from Bowie, Texas, to Clovis, New Mexico.

Illinois Section Manager Thom Beebe, W9RY, reported no ARES activations, but the state got up to 1 foot of snow with drifting. “Residents are being advised to stay at home, given the sub-zero wind chill and hazardous driving conditions,” Beebe said of his area, but he noted that other areas of Illinois are reporting similar conditions, with even more snow and significant drifting.

Alabama experienced a rare hard freeze overnight with light snow across the state, especially in the northwestern part of the state where some roads have been closed,” said Alabama SEC David Gillespie, W4LHQ. He said power outages have occurred, and temperatures remain below freezing.

“Roads are horrible especially in South Central Indiana,” was the report from Indiana Section Manager Jimmy Merry, KC9RPX, although no ARES groups have activated. He measured some 9 inches of new snow and more than 12 inches on the ground. “So far I haven’t heard of any power outages, but a lot of accidents have occurred on the roads.” Merry said the wind is supposed to pick up this afternoon, and he expects a lot of drifting. “We are supposed to get some more significant snow in the next couple of days,” he added.

[This story will be updated as new information becomes available.]