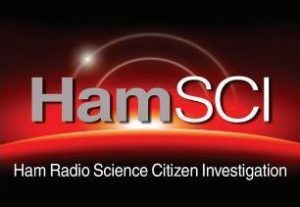 The article “Ham Radio Forms a Planet-Sized Space Weather Sensor Network,” appeared on February 9 in Eos, Earth & Space Science News — an American Geophysical Union (AGU) publication. It sprang from a project by the Ham Radio Science Citizen Investigation (HamSCI), founded by Nathaniel Frissell, W2NAF, of the University of Scranton, one of the paper’s authors. The others are David Kazdan, AD8Y, and Kristina Collins, both of Case Western Reserve University (W8EDU). The article says that with their experience dealing with ionosphere-influenced propagation, amateur radio operators have an empirical knowledge of space weather and offer a ready-made volunteer science community.

The article covers the method and research being used to monitor the effects of solar activity on Earth’s atmosphere, telecommunications, and electrical utilities — and the valuable data being crowdsourced from amateur radio signals.

“To fully understand variability on small spatial scales and short timescales, the scientific community will require vastly larger and denser sensing networks that collect data on continental and global scales,” the article asserts. “With open-source instrumentation cheaper and more plentiful than ever before, the time is ripe for amateur scientists to take distributed measurements of the ionosphere — and the amateur radio community is up for the challenge.”

“The reach of these crowdsourced systems, and the support of the amateur community, offers tremendous opportunities for scientific measurements,” the article notes.

The research acknowledges a handful of HamSCI collaborators — from organizations and universities — and is supported by National Science Foundation grants. HamSCI’s Personal Space Weather Station initiative aims to develop a network of specially equipped amateur stations that will allow amateurs to collect useful data for space science researchers. As the article explains, ham radio operators and researchers, through HamSCI, are designing hardware for a distributed network of personal space weather stations.