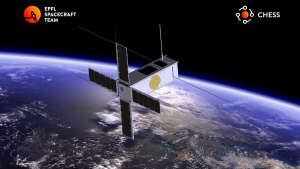 In 2020, a project between AMSAT-UK, AMSAT-NL, and Swiss universities got under way with the aim of equipping two Swiss satellites — for now under the CHESS name — with linear amateur radio transponders. Linear transponders permit several CW or SSB contacts to take place simultaneously within a prescribed passband. The satellites also include features for classroom demonstrations and experiments. The CHESS (Constellation of High Energy Swiss Satellites) project includes two satellites, which will be built simultaneously and later launched as a constellation.

“The main science objective is to improve the understanding of the upper atmosphere by in-situ measurements…taking advantage of a constellation of identical nanosatellites to study the composition of the terrestrial atmosphere and its density,” the CHESS website explains.

The amateur radio payload is a joint project of AMSAT-UK and AMSAT-NL. A successful review of system requirements was completed in December. Launch will not take place until the fourth quarter of 2022.

The satellites themselves are a project of the École polytechnique fédérale de Lausanne (EPFL), with support from several other schools. — Thanks to AMSAT News Service via AMSAT-UK