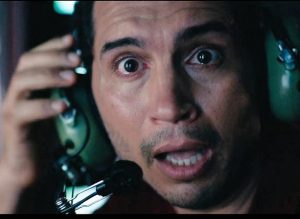 SuitSat loses its innocence in a new video short sci-fi

thriller Decommissioned. “Inspired by true events,” the video short resurrects the 2006 spacesuit/satellite that transmitted messages on 2 meters as it circled Earth. The original SuitSat-1 project, conceived by an Amateur Radio on the International Space Station (ARISS) team, repurposed a decommissioned Russian Orlan spacesuit to function as a free-floating amateur radio transmit-only satellite.

“ARISS designed and built an antenna and radio gear that got approved for installation into the suit, and cosmonaut Valeri Tokarev and Commander Bill McArthur, KC5ACR, put SuitSat-1 into orbit at the start of a spacewalk,” ARISS-US Delegate for ARRL Rosalie White, K1STO, recounted. SuitSat-1 transmitted a voice message, “This is SuitSat-1 RS0RS!” in several languages, plus telemetry and a slow-scan TV image on an 8-minute cycle as it orbited Earth.

In the 6-minute film, a SuitSat returns in the future to haunt International Space Station commander “Diaz,” played by Joey Vieira. Diaz is seen taking photos from inside an observation dome on the ISS when he spies some distant space debris and radios Houston to express concern.

“If there was any cause for alarm, you know we’d see it too,” Houston assures.

As the object closes in, an increasingly anxious Diaz recognizes the “debris” as SuitSat. “This is SuitSat,” comes a voice on the ham radio.

“Houston, you’re not gonna believe this. We’re picking up transmissions on the ham radio that sound identical to the SuitSat experiment,” he tells a skeptical mission control. “It’s SuitSat! I’m seeing SuitSat!”

Decommissioned was produced by Perception Pictures and directed by Australian filmmaker Josh Tanner. He told Gizmodo that he produced the video “using the Unreal Engine technology that The Mandalorian used, albeit old-school rear projection, as opposed to the fancy LED wall tech they used.”

SuitSat-1 — called Radioskaf or Radio Sputnik in Russian — was so successful that another unneeded Orlan spacesuit was subsequently refitted as SuitSat-2.

As an interesting sidebar with respect to the real SuitSat, White explained, “After the ARISS engineers calculated SuitSat-1’s orbit and spin characteristics, they knew the legs and arms would have to be filled with something, so they asked the crew to stuff dirty laundry inside.”

White said Decommissioned was a hit at a recent ARISS meeting. The original SuitSats were deorbited to burn up in Earth’s atmosphere after their useful lives ended.

ARRL is a partner in the ARISS program, which has kept amateur radio on the air from the International Space Station for 20 years. A hallmark of the ARISS program is the scheduled ham radio contacts made by astronaut crew members with schools and student groups around the world.