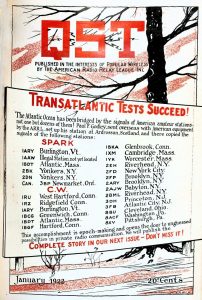 On December 11, 1921, radio history was made when the signal from amateur station 1BCG in Greenwich, Connecticut, was heard in Ardrossan, Scotland, marking the first successful transatlantic radio transmission using shortwave frequencies. Between 1921 and 1924, radio amateurs experimented with transmitting across the Atlantic. Sponsored by ARRL, these Transatlantic Tests aimed to prove that shorter wavelength frequencies could propagate long distances using transmitters running less than 1 kW. The initial run of the Transatlantic Tests was a failure. For the second Transatlantic Tests, ARRL dispatched receiver designer Paul Godley, 2ZE, considered one of the best of operators the day, to Europe to listen for participating stations. His nine-tube receiver employed the latest superheterodyne technology, which he modified for the frequencies used.

In one of those historical coincidences, during his voyage to England, Godley met Harold Beverage, who convinced him to use a specially designed, highly sensitive, and directional 1,300-foot antenna, referred to as the Beverage Antenna.

During a pre-event dinner arranged by his British hosts, Godley also met wireless pioneer Guglielmo Marconi, who asked him to remind US amateurs that “I, too, am but an amateur.”

Over the course of the test period, more than two dozen stations were heard between 230 and 235 meters, roughly 1.3 MHz in what is now the AM broadcast band. Some utilized spark-gap transmitters, others employed vacuum-tube CW transmitters. The one heard most consistently was a CW transmitter operated by six members of the Radio Club Of America — Ernest Amy, 2VK; Edwin Armstrong; George Burghard, 2SS; Minton Cronkhite, 1BCG; John Grinan, NJ2PZ, and Walker Inman, 2BGM. From 1BCG, they transmitted their message at 2152 UTC (then GMT) on December 11, 1921:

Reporting on the accomplishment, ARRL Secretary Kenneth B. Warner, 1EH, declared, “Excelsior!” The designation “test” evolved to “contest.” Inaugural contests include Field Day in 1934, the International Test in 1927, Sweepstakes in 1930, and the ARRL DX contest in 1932. — Thanks to Clark Burgard, N1BCG, and Mike Marinaro, WN1M