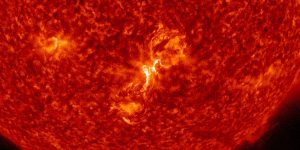 Solar activity has been fairly boring during the past few days but a surprise solar flare woke us up. A long duration C7.41 solar flare peaked today at 16:32 UTC. Sunspot region 2790 is to blame and that is a sunspot region facing Earth! Long duration solar flares are known to produce coronal mass ejections so the question is… was this an eruptive event?

The answer to that question is a huge yes! It became quickly apparent that this long duration solar flare would be eruptive. A huge amount of coronal dimming was observed which is an excellent  sign that a coronal mass ejection was launched during the event.