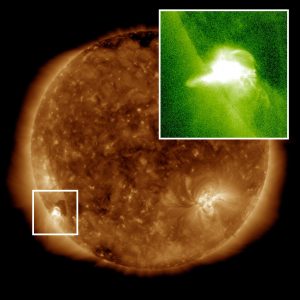 Sunspot region 2782 which is located near the south-east limb produced a long duration C2.6 solar flare which peaked today at 19:11 UTC. C-class solar flares aren’t the strongest solar flares out there but its long duration caught our attention as long duration solar flares are often associated with the release of a plasma cloud or what we usually call a coronal mass ejection. Based on SDO AIA 193 imagery we see that the explosion caused a rippling effect trough the corona (coronal wave) and darkening of the corona (coronal dimming) which are two signs that this solar flare might have released a coronal mass ejection into space. We can not confirm this yet due to the lack of coronagraph imagery from STEREO and SOHO at the moment but we will take a look at the coronagraph imagery as it becomes available. Due to the location of this solar flare, any ejected solar material is likely aimed away from Earth but this is also something we will analyse as soon as coronagraph imagery becomes available. Follow it live on www.spaceweatherlive.com