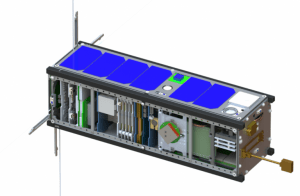 Neutron-1 CubeSat Scheduled for Deployment on November 5; Other Sats Pending

The 3-U Neutron-1 CubeSat is scheduled for deployment from the International Space Station (ISS) on November 5 at 10:40 UTC. For the satellite’s first month and during its commissioning phase, the Neutron-1 beacon will transmit 1,200 bps BPSK telemetry every 60 seconds on 435.300 MHz. Developed by the Hawaii Space Flight Laboratory (HSFL) at the University of Hawaii at Manoa (UHM), the satellite’s payload includes a VU FM amateur radio repeater during available times and according to the spacecraft’s power budget. The Neutron-1 science mission is spelled out in a formal paper, Neutron-1 Mission: Low Earth Orbit Neutron Flux Detection and COSMOS Mission Operations Technology Demonstration.

The primary mission of Neutron-1 is to measure low-energy neutron flux in low-Earth orbit (LEO). The science payload, a small neutron detector developed by Arizona State University, will focus on measurements of low-energy secondary neutrons — a component of the LEO neutron environment.

A number of other amateur radio satellites are expected to launch or be deployed in the next few months. AMSAT’s RadFxSat-2 (Fox-1E) is expected to go into orbit by year’s end on Virgin Orbit’s LauncherOne vehicle. RadFxSat-2 carries a 30 kHz wide VU linear transponder.

The Tevel Mission — a series of eight Israeli 1U CubeSats, each carrying a UV FM transponder — is expected to launch from India on a SpaceX Falcon 9 rocket in December. Also from the Herzliya Science Center is a 3U CubeSat called Tausat-1, which is scheduled to launch on a Japan Aerospace Exploration Agency (JAXA) ISS resupply mission in February for subsequent deployment. Tausat-1 carries an FM transponder.

In other amateur satellite news, Jérôme LeCuyer, F4DXV, set yet another record, this time via EO-88, on October 28, working Vladimir Vassiljev, R9LR, at a distance of 4,560 kilometers (2,827 miles). F4DXV is now a distance-record contact partner on 10 LEO satellites, while R9LR is a contact partner for records set on four LEO satellites. AMSAT tracks claimed distance records. — Thanks to AMSAT News Service