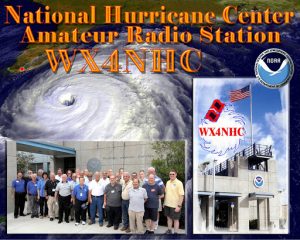 As Hurricane Eta increased to a major Category 4 hurricane with sustained winds of 140 MPH on track to landfall along the Nicaraguan coast, WX4NHC at the National Hurricane Center (NHC) activated, monitoring 14.325 MHz and 7.268 MHz, the frequencies used by the Hurricane Watch Net (HWN), as well as the VoIP Hurricane Net, Winlink, APRS, and other modes. As of Tuesday evening, Eta was not threatening the US mainland, and the HWN had not announced any activation plans but was at a Level 3 alert level.

As of 2100 UTC on Tuesday, the eyewall of what the NHC is calling “extremely dangerous Hurricane Eta” was making landfall just south of Puerto Cabezas, Nicaragua. The NHC warned of a life-threatening storm surge, catastrophic winds, flash flooding, and landslides across portions of Central America. Eta was moving to the west at a rather sluggish 3 MPH. The NHC said Eta was forecast to move farther inland over northern Nicaragua through Wednesday morning, and then move across central Honduras by Thursday morning.

“This will be another historic hurricane to hit this area during a historic active season,” said Assistant Amateur Radio Coordinator Julio Ripoll, WD4R, at the NHC.

Ripoll asked stations to relay any reports from stations or ships at sea in the affected area, with or without weather data, for use by NHC forecasters.

WX4NHC has a Hurricane Report Form on its website.

“NHC appreciates all the surface reports from the affected area during hurricanes as they fill in gaps of not just weather data, but also give them real-time, first-person perspective of what is actually happening on the ground,” Ripoll said.