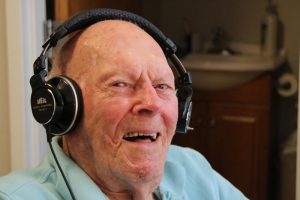 Charles Clifford “Cliff” Kayhart, W4KKP, of White Rock, South Carolina, died on October 26, a few days past his 109th birthday. An ARRL member, he was the oldest known US radio amateur and possibly the oldest ham in the world.

First licensed in 1937 as W2LFE in New Jersey, he also held W9GNQ. According to his obituary, Kayhart built his first radio at the age of nine. After working for New York Telephone Company as a young man, he became enamored with engineering, so he headed off to Tri-State University in Indiana, graduating with a degree in aeronautical engineering. Afterward, he went to work for RCA in New Jersey, becoming a quality control manager. Positions followed at Philco Radio and Bendix Aviation.

During World War II, Kayhart joined the US Army Signal Corps, which sent him off to school to study radar. He was assigned to the US Army Air Corps in Georgia and then sent to Hawaii to become part of a Signal Service Battalion. He served at Iwo Jima, shortly after the US victory there, setting up equipment for long-range radio communication and broadcasting, with rhombic antennas in four directions.

In 1946, Kayhart left the Army with the rank of captain, joining Magnavox the following year as its first field engineer; at the time, Magnavox was about to launch a line of television sets. Eventually, he was transferred to the Customer Acceptance Department in Tennessee. Kayhart traveled to Japan in 1963 in search of Japanese television sets. He retired from Magnavox in 1976.

In the 1970s, while living in Tennessee, he spearheaded a project that installed a 2-meter FM repeater on the summit of Camp Creek Bald, still in operation on the Tennessee/North Carolina border.

After Kayhart moved into an assisted living facility in 2017, he had an HF station in his room, courtesy of the Dutch Fork Amateur Radio Group, to which he belonged, and the Columbia Amateur Radio Club. Kayhart remained active on the air until shortly before he died.