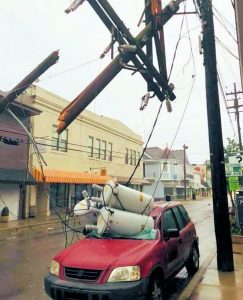 After an activation that lasted more than 9 hours, the Hurricane Watch Net (HWN) suspended operations on October 28 at around 0130 UTC.

“Although Zeta was still a hurricane just east of Hattiesburg, Mississippi, moving to the northeast at about 30 MPH, we hated to close operations, but propagation on 20 and 40 meters was totally gone,” HWN Manager Bobby Graves, KB5HAV, said. “The turnout of reporting stations was great, but we can always use more. Meteorologists love weather data. So, we do our best to collect and forward as much as we can.”

The Northern Florida ARES Net convened October 28 on 3.950 MHz for about 12 hours in anticipation of tropical storm winds and a risk of tornado activity. “Our HF net shut down this morning,” Northern Florida Section Emergency Coordinator Karl Martin, K4HBN, said. “The counties closed shelters and had their ARES groups stand down soon after.” Martin said operators did cover three shelters. “We had challenges due to HF conditions, and one of the ARES groups lost a repeater and had to go to a back-up plan.”

“As the sun comes up, damage assessments are still ongoing,” the George County Sheriff’s office announced on the George County ARES Facebook page. “Currently a majority of the county is without power.” The sheriff reported many downed trees and power lines and advised against nonessential travel.

WX4NHC at the National Hurricane Center (NHC) in Miami activated at 1600 UTC on October 28, monitoring HWN’s frequencies of 14.325 and 7.268 MHz as well as the VoIP Hurricane Net (VoIP WX) and other resources. The net funnels “ground truth” reports to NHC forecasters.

Ham Aid emergency communication kits from ARRL had been pre-positioned in Louisiana in preparation for this event.

HWN Manager Graves said, “2020 has been a well above-average season for tropical cyclones” with half of the systems that developed making landfall. “Adding to the pandemic [that] all have had to deal with, we as amateur radio operators, have had to deal with very poor propagation, thanks in part to what has seemed to be a never-ending solar minimum.”

Graves said the number of HWN check-ins also is down, a factor he also attributed to less-than-ideal propagation. He said the NHC really depends on the information radio amateurs on his net collect.

He reminded that Hurricane Season doesn’t end officially until November 30, but nature doesn’t respect the calendar. “Tropical systems can and have formed during every month,” he said. “In 2005, Zeta didn’t form until the last week of December and lasted into January. Also, we still have many more Greek names to use, but I sure hope we don’t have to see one named Eta,” which is the next letter in the Greek alphabet.