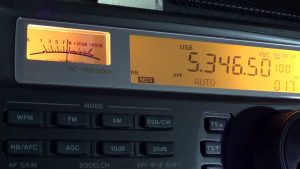 New Zealand Amateur Radio Transmitters (NZART), the national amateur radio organization, said the New Zealand Defence Force (NZDF) advised the organization that it was not willing to approve another renewal of the 5 MHz trial allocation. NZART has indicated that it will continue to work with telecoms regulator RSM to see if other ways may be available to provide access to 5 MHz frequencies by New Zealand amateurs.

As in the US, the federal government and military are primary on the 5 MHz band. According to NZART, the decision was not made lightly by NZDF, but access to that part of the HF spectrum is very important to support NZDF’s new platforms, tactical radio equipment, and updated HF site equipment in the delivery chain.

“Additionally, access to HF is a key part of their communications plans both in New Zealand and to support our forces overseas,” NZART explained. “While this is a disappointing outcome, NZART would like to thank NZDF for allowing us to take part in the trial, and we look forward to working with them in the future on matters of common interest.” — Thanks to Paul Gaskell, G4MWO/The 5 MHz Newsletter