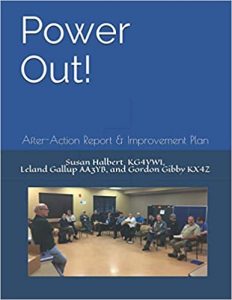 “We have actually published over a dozen different books, some of them educational and some of them after-action reports,” Gibby said.

The narrative describes an interoperability effort with local fire and rescue personnel that led to a better understanding of these professionals. The exercise revealed many weaknesses in the volunteer group’s response, which were subsequently addressed, leading to an even stronger team. The report is presented in HSEEP format.

“Amazon handles all of the printing and distribution,” Gibby explained. “This is a fantastic way for clubs to produce educational material, and I’ve tried to teach several people how to do it. It’s a labor of love to provide more professional literature for amateur radio emergency communication efforts.”